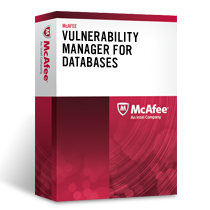 You store your most valuable and sensitive data in a database, but most vulnerability assessment products don’t know enough about database systems to thoroughly test them, putting your data at risk. Practically every week there’s yet another announcement of a major data breach. McAfee® Vulnerability Manager for Databases automatically discovers databases on your network; determines if the latest patches have been applied; and tests for common weaknesses, such as weak passwords, default accounts, and others, making it easier than ever to demonstrate regulatory compliance and better protect critical data.

Conducting more than 4,700 vulnerability checks against leading database systems such as Oracle, Microsoft SQL Server, IBM DB2, and MySQL databases, McAfee Vulnerability Manager for Databases evaluates risk from virtually every threat vector. But, unlike other products where scan results can often overwhelm you with a myriad of minor threats hiding the critical issues that need to be addressed, McAfee Vulnerability Manager for Databases goes far beyond that. Based on input from database security experts, it clearly classifies threats into distinct priority levels and provides fix scripts as well as recommendations.

Get unparalleled visibility into database security posture
Know exactly where risks are and how to minimize the likelihood of a breach by automatically discovering databases on the network, and conducting more than 4,700 checks for vulnerabilities.

Save time and money by reducing the need for external database security consultants
Get recommendations for remediation for the most high-priority vulnerabilities, in many cases augmented with fix scripts you can run to address any issues.

Gain access to more than 4,700 security verifications
Get comprehensive and up-to-date checks of the most popular database platforms reporting on meaningful criteria such as version/patch level, changed objects, modified privileges, and forensic traces from common hacker tools.

Discover databases and sensitive tables automatically
Find databases by scanning the network or by importing from existing tools, and identify tables containing restricted information based on preset patterns.

Check passwords quickly and efficiently
Use a variety of techniques to detect weak passwords and shared passwords, including hashed passwords (SHA-1, MD5, and DES), by downloading data for local analysis to avoid affecting database performance.

Get out-of-the-box regulatory compliance reports and custom reporting
View reports for PCI DSS and other regulations, as well as specific reports for various stakeholders such as database administrators (DBAs), developers, and InfoSec users.

Get recommendations and fix scripts for high-priority items
Organize items by priority and provide actionable recommendations for remediation based on input from leading security researchers.

The Fastest Path to Database Compliance

With a set of features designed to speed initial scans and out-of-the-box reports to address most compliance requirements, McAfee Vulnerability Manager for Databases delivers audit-ready results with minimal resources.

To get your first assessment completed quickly, McAfee Vulnerability Manager for Databases:

Compromised passwords are responsible for a significant percentage of data breaches and hackers have become much more automated in their attacks based on simply guessing passwords. Basic security principles include avoiding weak passwords and preventing sharing of passwords across users and accounts, but how do you know it’s happening?

By using direct connections to databases, password checking is accomplished without significant load on the database server and does not lock out users for excessive login attempts.

Database management systems are complex, introducing their own set of security risks, some of which are similar to other system software (such as patch updates, password strength, and others) and some of which are unique to databases (such as threats from SQL injection or buffer overflow exploits). McAfee Vulnerability Manager for Databases comes from the team that’s credited with contributions in seven of the last 10 critical patch updates (CPUs) that Oracle released. It leverages the expertise of leading database security practitioners to:

Integration with the McAfee ePolicy Orchestrator Platform for Maximum Visibility

McAfee Vulnerability Manager for Databases is fully integrated with the McAfee® ePolicy Orchestrator® dashboard, providing centralized reporting and summary information for all your databases from a consolidated dashboard. It delivers detailed information and scan configuration as well as direct links to invoke the vulnerability scanning management console with granular control over every operation.

These are minimum system requirements only. Actual requirements will vary depending on the nature of your environment.